Why don’t we celebrate life while the person is alive? 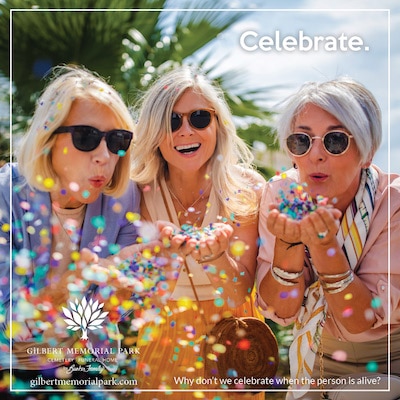 Interesting question, isn’t it? The person asking the question had recently attended what he described as a “fabulous funeral.” Turns out the funeral was billed as a celebration of life. Our questioner, Mark, attended because the person who died was the mother of a co-worker he had worked with for more than 30 years.

Mark was so impressed with the woman’s talents, interests, and accomplishments, all of which were highlighted during the service, he said he wished he had known her. The service got him thinking. Perhaps the deceased would have enjoyed seeing how much her neighbors, friends, grandchildren and children thought of her? Mark was thinking it might be better to celebrate a person’s life BEFORE they die.

What about that idea? Don’t we do that? Celebrate a person’s life while they are alive.  It’s called a birthday party. Maybe we hold back a little. Perhaps we don’t gush over the person’s accomplishments as much on the birthday because the birthday boy or girl is too humble to feel comfortable being lauded while present and breathing?

So, is the value of a wonderful life celebration/funeral diminished because the person it was all about isn’t there to enjoy it? Or does the “value” of a funeral run deeper than that?  Isn’t a funeral a validation of the significance of life in general? Might the fact that Mark was so moved by this ordinary women’s life inspire him to make more of his own? Isn’t it a worthwhile lesson for all of us to take a few hours and remember a person who died? Each of us is unique.  Each of us walks a different path. Shouldn’t just about everyone’s life be summed up with a “fabulous funeral”?