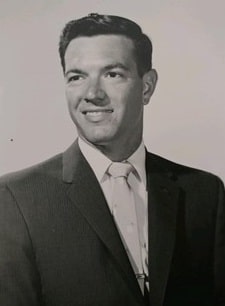 On Monday, March 29, 2021 in Gilbert, Arizona, Walter Ronal Smith, Jr. returned to his heavenly home to reunite with his parents, brother, twin sons and other family members. We can only imagine what a glorious reunion it was for “Ronal” to embrace his loving family on the other side of the veil!

Ronal was born on March 5, 1936, in St. Louis, Missouri to Walter Ronal Smith, Sr. and Christina May Beck Smith.  He was the oldest of three children. His younger years were spent in St. Louis, Missouri with many aunts and uncles, cousins and friends.  His family moved to Southern California when he was 15 years old to live where there is an abundance of sunshine.  Ron attended UCLA and earned a degree in Engineering. He worked for the government as a civil engineer for over 40 years.

He met the love of his life, Madelyn Joyce Cripps, and the two were married in the Los Angeles temple on July 9, 1965.  Together they had 8 children.  He raised his family both in Poway, California where he worked at Miramar AF as a civil engineer, and then moved to Boulder City, Nevada in 1978 to work for the Bureau of Reclamation.

He was a faithful son of God, and served a mission in Brazil in the early 1960’s.  He loved the Lord and was a good example to those around him.  He loved to study the scriptures, and served many years as a gospel doctrine teacher.  He served three missions with his wife to Florida, Georgia, and New Jersey.

He had a great sense of humor and attitude about life and his trials. Even on his deathbed, with some of his children surrounding, he cracked a joke that this was a scheme to get all his children together for a visit.  He had an infectious laugh, and had a kind and gentle spirit about him. He was chivalrous and always opened the car door for his wife.  He built a telescope to show his children the planets, took his family on campouts and road trips.

He left behind a legacy of love for God, Family, and the Gospel of Jesus Christ.  We will miss you dad!