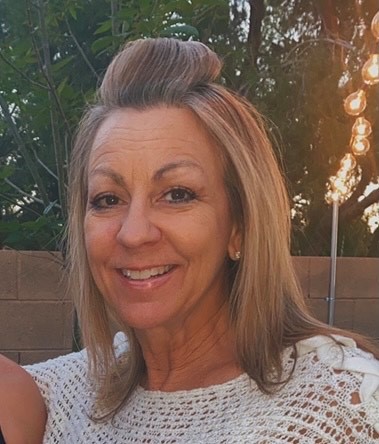 Terri Lynnette Wieland, 53, passed away peacefully on October 26th, 2021 in Chandler, Arizona. Terri was a very strong and loving individual. She was an outstanding mother as well as a loyal friend to many.

Terri was born in Jackson, Michigan on May 28, 1968. Terri grew up in Lansing, Michigan before pursuing interior design at Kendall school of art and design in Grand Rapids, Michigan. She continued her studies in computer aided design at the CAD institute in Phoenix, Arizona. Terri became proficient in this field. After returning Wisconsin for 10 years and having her three children there, she moved back to Arizona in 2006 where she spent her last 15 years. Here in Arizona she sought out growth in the construction industry as a project manager where she worked diligently until she passed away. She was always the hardest worker and cared so much for everyone. Terri absolutely loved spending quality time with her kids, watching movies and sports, as well as spending her time enjoying the sunshine in any way she could.

Terri is survived by her three children Ariel, Anah and Austin Wieland; her ex husband and close friend Jeff Wieland; her mother Sandra Lopes; and her two sisters Tracy (Paul) Elieff, and Tamie Lopes; her nephew Tanner and nieces Sierra, Ryley and Isabella.

Terri was preceded in death by her father Arthur Lopes, as well as her grandparents, Joan (Nana) Desero, Robert Neel, John and Arlene Lopes.

The Memorial services will be held both in Arizona and her hometown in Michigan.

The Arizona memorial service will be held at Floridino’s Pizza and Pasta on Sunday, November 28th from 2-4pm.

The Michigan memorial service will be held in late December 2021. Date, time and Location TBD.

In lieu of flowers donation to American Diabetes Association as this is a foundation Terri was very fond of supporting. PO Box 7023 Merrifield Virgina 22116