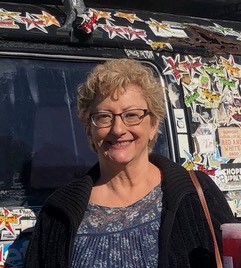 Suzie Hagood Lavett was born on July 22, 1953 in Birmingham, Alabama. She passed away on November 6th at the age of 67 in Gilbert, Arizona.

She is preceded in death by her parents, Mary Elizabeth and Horace Hagood. She is survived by her husband, Michael F. Lavett; daughter and son-in-law, Shelley and Jeremy Decker; grandson, Colin Decker; sister and brother-in-law, Sally and Don Fulton; niece, Beth Fulton; and nephews, Donald Fulton and Bobby Vallejo.

Suzie married Michael F. Lavett in 1971 when she was just 18 years old and Michael was 21. When she talked about getting married at 18, she often joked, “if I had known I was going to live this long, then I wouldn’t have married so young.” Despite the jokes, she had a long and successful marriage of 49 years. Mike and Suzie traveled extensively, visiting Alaska, the Bahamas, San Francisco, and many other places. They built a great life together, buying their dream home in Birmingham where they lived for many years before moving to Arizona to be near Shelley, her husband, Jeremy, and, most importantly, her grandson, Colin. Suzie was a wonderful wife and mother, so it was no surprise that when her grandson was born, she gave her position of grandmother her all. Colin was the light of her life; she was always on Colin’s side, whether he was right or not, and spoiled him without remorse. In other words, she defined what it means to be an amazing grandmother.

Suzie retired from AT&T after a 30 year career where she demonstrated an astounding work ethic that allowed her to rise from a telephone operator to a director. She took her work responsibilities seriously and one of her closest friends, Lynn Smith, recalls Suzie saying “What are the facts? Let’s stick to the facts,” which was her pragmatic nature. Her work ethic was admirable but also provided her family with some amusement; we often teased her about the time she refused to go immediately to the emergency room when she broke the small bones in her foot. Instead of heading to the ER, she dressed for work, put a sneaker on the broken foot, and limped through a long day before finally going to the doctor. When asked why she waited, she shrugged and said, “ I had a meeting scheduled and things to do.” Her dedication to doing her best was evident and earned her well-deserved awards, promotions, and the respect of her peers, many who became lifelong friends.

After retirement, Suzie spent time volunteering and fostering dogs with the Birmingham Boston Terrier Rescue. She gave loving homes to many older and special needs dogs and Boston terriers were close to her heart. Therefore, in lieu of flowers, please consider making a donation to Birmingham Boston Terrier Rescue at http://www.bhambtr.org.  There will not be a memorial or funeral service.