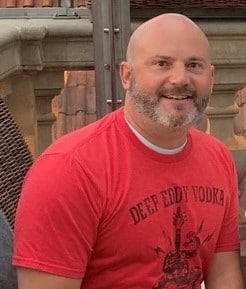 Steven W. Smithers, 42 years old, passed away unexpectedly on Saturday, March 21, 2020 while visiting Glendale, Arizona. His residence was in Dripping Springs, Texas. He was born on
May 27, 1977 in Topeka, Kansas, the son of Wayne and Linda (Immenschuh) Smithers.

Steve graduated from Seaman High School (Topeka, Kansas) in 1995 and from Kansas State University in 1999 with a Bachelor of Science in Chemistry. He continued his education with receiving a Master’s Degree in Occupational Safety and Health/Environmental Management from Columbia Southern University in May 2010.

Since April 2017, Steve worked for Quest Diagnostics as a Manager of Corporate Environment, Health and Safety. Previous employment included various positions in Global Safety and
Management with Praxair Electronics/Inc. from 2001-2017. His profession required a lot of travel that allowed him to work and see the world including Thailand, India, Brazil, China and
several other foreign countries and all over the United States.

Steve was a friend and a brother to many people. His travels allowed him to meet and form many special friendships. He enjoyed vacationing in Mexico where he spent time on the beach,
scuba diving and conversing with the local islanders. He was fun loving, enjoyed life, very generous, and truly loved by everyone. He will be missed by many.

He is survived by his Dad and Stepmother, Wayne and Agnes Smithers of Ozawkie, Kansas; his sister, Sandra (Smithers) Owen and her two sons, Scott and Travis of Anthony, Kansas.
Additional family also includes a half-brother Ken (Teri) Smithers of Belton, Missouri, two step-sisters, Katie (Bill) Metzger of Topeka, Kansas and Kim Herring (Nick) of Meriden, Kansas
and a step-brother Chad (Jenny) Brading of Meriden, Kansas and other extended family members. Steve did get married in 2015 but later divorced.

Steve was preceded in death by his Mom, Linda Smithers.

Gilbert Memorial Park Funeral Home of Gilbert, Arizona was in charge of the cremation. Donor Network of Arizona was the recipient of his donated organs. The Celebration of Steve’s
Life will occur at a later date that will be posted on his Facebook page.

Memorials may be made to “Hounds for Heroes” in honor of Steve and his support for the military and love for dogs, especially his own dog Zeus. Donations can be made online at
TheDogAlliance.org/Donate or be mailed to The Dog Alliance, 1321 W. New Hope Drive, Cedar Park, TX 78613.