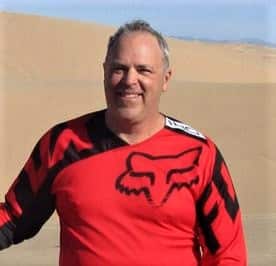 Spencer Darrin Wallace, 57, of Mesa, AZ, passed away Wednesday, December 21st, 2022, at HonorHealth Scottsdale Osborn Medical Center in Scottsdale, AZ, with family and friends by his side.

Spencer was born June 20, 1965 in Kewanee, Illinois and was the youngest of three children born to Robert and Mary (Mercer) Wallace.  He graduated from Kewanee High School in 1984 and worked at Classic Coach Interiors converting vans.  Spencer moved to Tempe, AZ in 1986 and began working at the General Motors Desert Proving Grounds in Mesa, AZ a year later.  In 1990, he transferred to the Allison Transmission Division of GM working his way up to his most recent position as a Customer Integration Engineer.  Spencer loved his job testing and integrating the heavy duty transmissions on oil rigs, buses, dock spotting machines, trucks, diamond mine equipment and much more across the US and Canada.

Spencer was united in marriage to Lois Jean DeRycke on September 12, 1986 at Windmont Park, Kewanee, IL.  They settled in Mesa, AZ where they raised their two sons, Nelson and Avery.  Of all his life’s achievements, he was most proud of his two boys who both graduated from ASU and are working as engineers.

Always on the go, he had many hobbies during his life.  Flying model airplanes, BMX bike racing, water-skiing, snow-skiing, Air-chairing, riding ATVs, cycling and hot-rodding to name a few.  Spencer lived his life to the fullest, but also loved spending time with family and friends.   He was a loving father, grandfather, son, brother, uncle, friend, and husband.

A celebration of life ceremony will be held at 10:00 am on Friday, December 30, 2022 at Gilbert Memorial Park Cemetery & Funeral Home (2100 E. Queen Creek Rd. Gilbert, AZ 85297) followed by a reception from 11:00am – 1:00pm.  Spencer’s family asks those in attendance to wear their favorite riding jerseys, car shirts, bike jerseys, etc. and to please bring any Hot Rods, motorcycles, or fun vehicles to show off, as he loved them all.

In lieu of flowers, his family would ask that you send a donation to Henry County Senior Citizens, Inc. of Kewanee, IL, or a charity of your choice in his honor. A memorial ceremony will be held in Kewanee, IL at a later date.