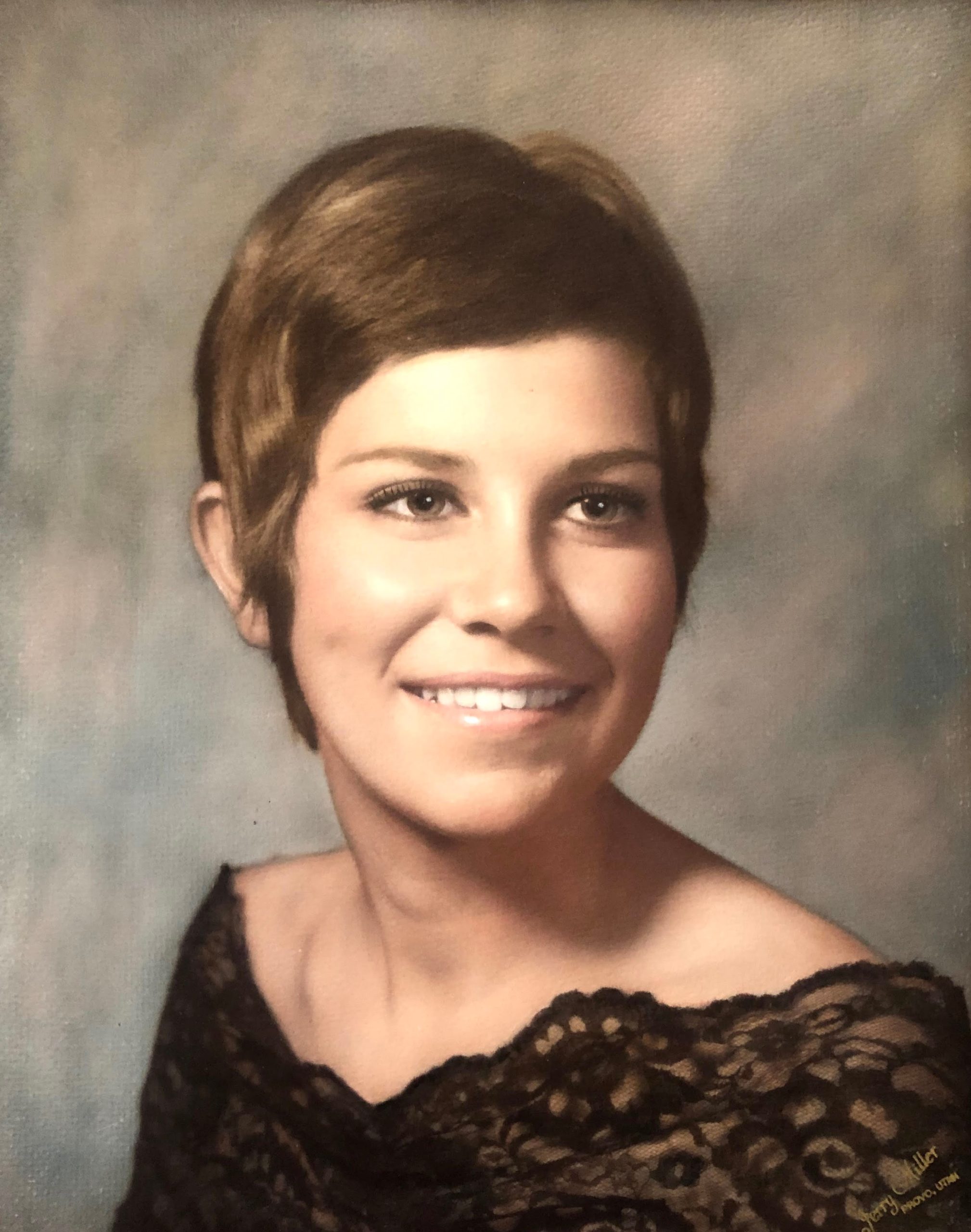 Peggy Armina Lewis Kennedy was a bright light to all who knew her and was always gracious, kind, and courageous.  She bravely endured the difficulties of the chronic degenerative type of Multiple Sclerosis (MS) for nearly 40 years, and it finally claimed her life on April 20, 2020 at the age of 67.  It slowly but surely robbed her of her mobility and her ability to communicate, but through it all she stood tall and kept her wonderful smile.  She taught us by example what it means to “endure it well” (Doctrine and Covenants 121:8)

Peggy was born August 5, 1952 in Holbrook, Arizona, the third child of Farrell Walter Lewis and Irene Whiting.  There would be six Lewis children, five girls and a boy.  Peggy grew up in Holbrook through about 6th grade, when the family moved to Provo, Utah.

By all accounts Peggy was as sweet as they come as a child.  Her Grandpa Whiting called her “Pugar,” a playful combination of Peggy and sugar.  She was a natural athlete, and her sister reminisced that “Peggy could run really fast and do cartwheels better than anyone in the family.”  How wonderful to think of her now released from her mortal body, running really fast and doing cartwheels again!

Peggy married John Aden Kennedy in the Provo Utah temple on November 15, 1973.  John was a handsome ranch-hand turned business major from Randolph, Utah, and they decided to build a life together.  Upon graduation from BYU they did stints in Texas and Illinois as John began his career in sales.  Longer stops included Mesa, Arizona, South Jordan, Utah, San Diego, California, and Kaysville, Utah, before landing in Gilbert, Arizona, where they’ve spent the last 23 years.

John and Peggy raised two boys and two girls.  Peggy’s love and patience towards her young children was clear to others who marveled at how with gentle tones she was able to get her kids’ attention even in chaotic situations.  When the family was out and about, it was not unusual for people to compliment their children’s excellent behavior.  Of course Peggy’s sweet influence was behind it…coupled with the occasional threat of a wooden spoon.

As her health slowly deteriorated, Peggy fought back, exploring numerous treatments, both conventional and unconventional.  In the midst of all that, she also went back to BYU to try to finish her degree, adding to the complexity and stress in her life.  Her children remember the faith she showed during those years, trusting in the Lord and gathering her children around her in prayer and scripture study.  Her symptoms continued to intensify, leaving her in need of help for most everything.  By the refiner’s fire, Peggy gained an extraordinary measure of grace and dignity that she now carries into the eternities.

John and Peggy’s long devotion to each other has uplifted all who know them.  John has served as Peggy’s faithful caregiver over the many years of her steadily declining health, enduring to the very end.  Their love story does not end here, thanks to their love for each other and their faith in Jesus Christ and His restored gospel.  By their quiet examples, they have taught powerful lessons about what really matters in this life.

Peggy was preceded in death by her mother, Irene Lewis.  She is survived by her father, Farrell Lewis, her husband, John Aden Kennedy, and her children and grandchildren, as follows:

Since we can’t see you, we would welcome condolences, which can be posted below. In lieu of flowers, consider making a donation to the Multiple Sclerosis Society or to the charity of your choice in Peggy’s honor.