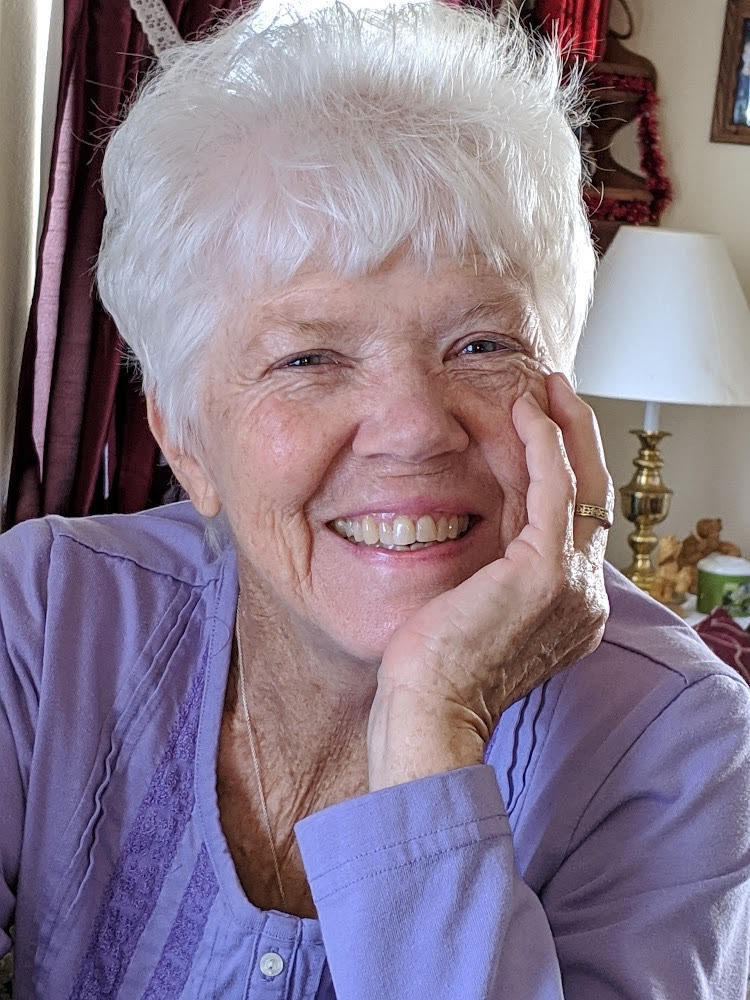 Marlene Kay Fox passed into the arms of Our Lord on March 6, 2022 after complications from chemotherapy to treat amyloidosis. Born on December 29, 1944, Marlene was the fifth of seven children born to Everett Charles Schilling and Ida Mae Schilling (née Allen): Robert Charles (Bobby), Beverly Joy, Everett Edgar (Eddie), Marilyn Rose, Marlene Kay, Earl Patrick, and Linda Darlene. Although born in Brigham City, Utah, Marlene was raised a tree-climbing, ball-playing tomboy in and around Clovis, California. She was rough and tumble, but she could sew almost anything and learned to crochet beautifully as well (she never liked knitting). She was making clothes for herself and her family by the time she was in high school. Marlene was stubborn from the word go and particularly dug her heels in against her brother Eddie. Though sometimes troublesome as a child, this trait made her kindness impossible to refuse as an adult. Marlene grew up singing with her siblings as her mother played guitar. Music remained important to her throughout her life. Similarly, Marlene loved to dance – which is how she met Ed.

Marlene married Lowell “Ed” Fox in November of 1968, and followed him across the globe and twelve bases, including Guam and the Philippines, during his career as an officer in the Air Force. She volunteered with Family Services, served in the Officers Wives Club, and enjoyed playing tennis as much as possible. After settling in the Gilbert area in 1994, Marlene filled her time in “retirement” with bowling (continuing a pastime she enjoyed on the various bases), editing the MOAA newsletter, becoming a die-hard Diamondbacks mega-fan, and ensuring that her grandchildren’s lives overflowed with love.

Marlene is survived by her husband Ed, older sister Marilyn (husband Rex), younger brother Earl (wife Maria), younger sister Linda (husband Vince), five children (seven including the spouses of children whom she claimed like her own) – Ron, Robert, Shanda and Marc, Lowell, and Crystal and Levi, twelve grandchildren, thirteen “bonus” grandchildren (the children of close family friends – Marlene’s heart was huge), an abundance of nieces and nephews, and many people who called her mom.

A funeral mass was held at our home parish, St. Mary Magdalene, on March 31st, 2022, with a Rosary preceding. While we intended to stream and record it, we encountered technical difficulties. We do have the images from the worship aid to view for those who missed it, as well as the recordings of the songs chosen by us for Marlene’s Mass. Find them by clicking these links: songs and pictures.

Marlene’s baseball-themed Celebration of Life was held at the Gilbert Community Center on April 2nd, 2022. Here are links for the picture slideshow shown as well as a link to the video of the tributes from the live-streamed event:

Marlene was cremated and inurned at National Memorial Cemetery of Arizona in Phoenix on April 4th, 2022. The Knights Templar Honor Guard were present. It was a very windy day so audio is not ideal, but you can watch the services with this link: Cemetery Videos. Her marker is at plot 70-1556 for anyone wishing to visit. Pictures of her marker are included on the “pictures” link above.

We chose Ryan House as a charity for those wishing to honor Marlene. This amazing organization is partnered with Hospice of the Valley which we love and who tended to Marlene in her last hours, but is focused on helping kids and their families which was very important to Marlene. Read more about Ryan House (or donate) here: Ryan House

We hope these memorials bring comfort to those who shared these experiences with us as well as to those who were only able to attend in spirit.

You, my brothers and sisters, were called to be free. But do not use your freedom to indulge the flesh; rather, serve one another humbly in love.
Galatians 5:13