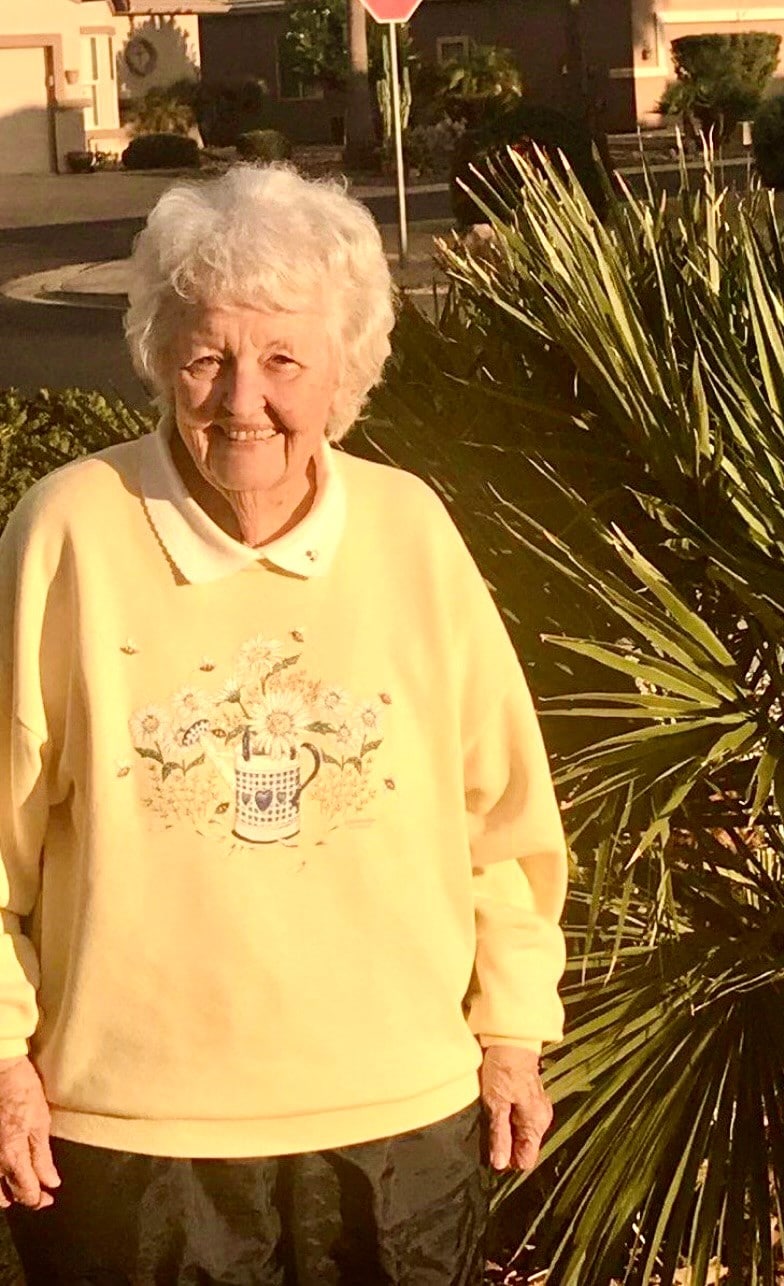 Margaret Elsa Sonnenberg, age 90, entered the joy of heaven on May 3, 2022, to meet the Savior whom she had loved and served. She was at home in Chandler, Arizona, with family by her side.

She was born at home on her parents’ farm in Bessie, Oklahoma, on December 11, 1931. Only nine years earlier her parents, Jacob and Susanna (Dick) Kroeker, and her two older brothers, John and Frank, had escaped Ukraine during the communist revolution. Her father was a Mennonite Brethren pastor and part-time farmer, her mother a full-time homemaker. At home the family spoke German and Margaret was called Gretel.

Margaret grew up during the Dust Bowl years, the Great Depression, and World War II and learned to be frugal and content. In 1940 the family moved to Gladwin, Michigan, and in 1944 to Leamington, Ontario. Margaret was saved at age 12 and was baptized in Lake Erie. As a teenager she took piano lessons and sang soprano in the church choir. She eventually quit school to work full-time and help support her parents.

On October 3, 1948, she was united in marriage to Edward Willms, who attended her church in Leamington. For a short time, the young couple lived near Margaret’s brother and wife in Kansas while Ed attended Tabor Bible College in Hillsboro and she worked. They then moved to Detroit, Michigan, to find employment. There they raised a family of three daughters and two sons. Margaret was active in her church, co-starting a nursery so other mothers could attend services, and teaching children’s church, Vacation Bible School, and an 8th-grade girls Sunday School class. Her students remember how she made the lessons interesting.

Margaret was a full-time mom and wife until age 35, when the unexpected death of her husband made her a single parent of five children ages 5 to 16. She continued to make her children her priority, finding part-time work at McDonald’s so she could be home when they were out of school.  She also refused to consider remarriage, because she didn’t want a step-dad to come between her and her kids. She kept the family together, taught her children the importance of working hard, of not spending more than they earned, and of saving up for a rainy day. She kept a shoebox filled with trinkets that her children could choose from when they memorized Scripture and could repeat the verses without error. She knew how to motivate them!

When her youngest child entered high school, Margaret knew she would need to go back to work full-time, so she enrolled in GED classes at night. She anticipated getting a job as a secretary until one of her teachers, a Mr. Rosen, told her she’d make a good nurse. When she applied to the LPN program at Sinai Hospital, she scored higher on their entrance exam than anyone in the history of the school. She graduated at age 48, the oldest person in her class, and worked for 24 years on the cardiac floors at Sinai and St. Joseph‘s hospitals before retiring at age 72.

In May 1985, after living alone for 18 years, she was married to Edwin Sonnenberg, whom she had known at church for many years. They enjoyed spending time with their grandchildren and traveling to China and Africa, and were blessed with good neighbors.

Margaret loved history and eagerly shared what she learned with friends and family. She loved to write and, in her eighties, wrote a booklet describing her parents’ perilous 18-month journey from Ukraine to the United States. She wanted her descendants to appreciate the legacy they had been given and to know that God can be trusted. She enjoyed being a grandma and great-grandma, and delighted in the accomplishments and individualities of her grandchildren and great-grandchildren.

Margaret leaves behind her children, Linda Willms of Portland Oregon; Marlene Shaw (Doug) of Post Falls, Idaho; Randall Willms (Charlene) of Chandler, Arizona; and Karen Hicks (James) of Washington, Michigan; 7 beloved grandchildren; and 11 precious great-grandchildren. She is also survived by her Kroeker nieces and nephews, and by her first husband’s family, with whom she kept in touch until she could no longer make phone calls. Also surviving her is her Sonnenberg family: Judy Coote of Lutz, Florida; Carol Herrmann of Crossville, Tennessee; Bonnie McReavy (John) of Garrell, Texas; Edwin R. Sonnenberg (Connie) of Attica, Michigan; and 11 grandchildren and 25 great-grandchildren. She was preceded in death by both husbands, her parents, her brothers John and Frank, and her son Dennis.

The family would like to thank Hospice of the Valley for the loving care they provided.

Family and friends can leave comments at: https://www.gilbertmemorialpark.com.  Go to the bottom of the page and click on her picture.

A private memorial service is being planned for the future. In lieu of flowers, memorial contributions can be made to Ukraine refugee relief efforts at Send International using the following link:  https://www.send.org/advocacy/campaign/162633/help-ukraine-23