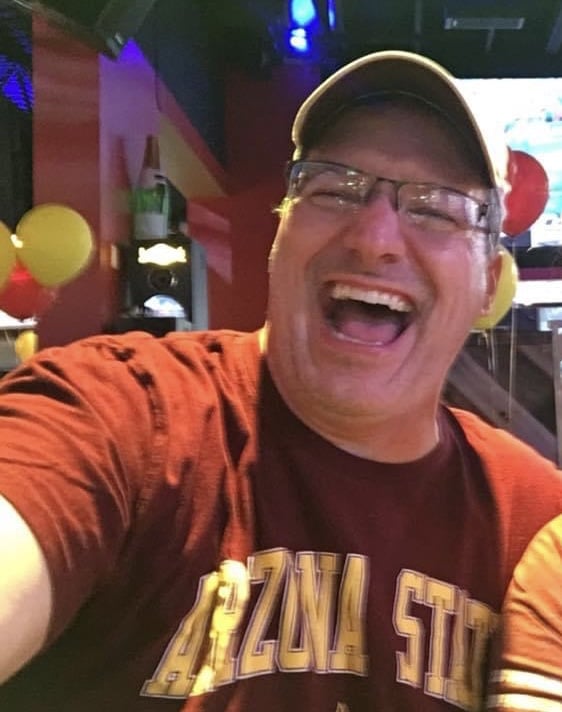 Joseph Roland Klimczak passed away peacefully in his home, on Wednesday, September 29, 2021 in Gilbert, AZ, after a courageous battle with Non-Hodgkin’s Lymphoma. We lost him sooner than expected, as he was just 59 years old.

Joe was born on August 18, 1962 in Chicago, IL. He spent his younger years in the city, but then moved out to the suburbs, and grew up with his family and friends in Mt. Prospect, IL. Joe attended Prospect High School and had a close circle of friends that he loved, and kept in touch with daily.

Joe joined many family members working at Deluxe Check Printers in Des Plaines, IL, spending many years there. He made many friends and had very fond memories. During that time, Joe also attended DePaul University. After leaving Deluxe, Joe started his own printing and promotional business, which he had for several years.

Following his printing days, Joe really took an interest in the financial world. He had worked with a variety of banks and lending institutions over the years, in a variety of roles. He worked with Cardunal Savings, Countrywide, Wells Fargo, and Chase, to name a few. Joe always worked hard and really loved his job.

Joe had dated Michele Harding for several years, before marrying her on Jan 2, 1998, at Grazi, in Des Plaines, IL. Joe and Michele were blessed with their only son, Bryce, in December of 2000. Joe was very proud of Bryce and all his accomplishments with both his education and lacrosse, especially his acceptance to Arizona State University’s Chemical Engineering program. Joe was elated that Bryce was also a hard worker, team player, and a strong leader, and was excited for what his future would hold. Joe also loved that Michele and Bryce share a close relationship. Their first home in 1998 was in Huntley, IL before they had their dream home built in 2005, in Algonquin, IL. The family resided there until they relocated to Gilbert, AZ in July 2013.

Joe always had a love for the family dogs, which were several over the years. Keeping a promise to his son, shortly after moving into their Algonquin home, he and Michele took Bryce to pick out their first yellow lab puppy. Bryce chose to name him Boomer. Boomer was your typical lab, with a lot of energy, and always getting into something. He was very loved, but over the years Joe became especially close to the Boom. He had daily conversations with him and would create daily posts with a picture on social media. He was working on a book based on their conversations, as everyone loved reading about him. Boomer passed away a few years ago, and Joe had a rough time losing his best friend. After losing Boomer, the family rescued Nala, another yellow lab. She fit right in, stole their hearts, and before you knew it, Joe was having daily chats and throwing a ball to her every day. He was back in his happy place.

Shortly after moving to AZ, Joe spent several months preparing for, and completing all of his series testing to become a Financial Advisor. He was very proud to have his name on the door of his own Edward Jones office. This is where he and Michele actually met their best friends in Gilbert, AZ. When the market shifted, Joe made a change back to Chase, where he earned a promotion to Private Client Advisor, with JP Morgan. Everyone at all of his branches thought highly of him, both his co-workers and clients. His strong work ethic recently earned him another promotion, which took him up north in the mountains, to Payson, AZ. He and Michele had their main home there, but kept a townhome in Gilbert, AZ, for Bryce to go to school, and to have a place in the valley to see Bryce and their friends.

Joe had a tough year with his fight, especially during the pandemic. He had a massive pulmonary embolism in December, was diagnosed with Non-Hodgkin’s Lymphoma and started chemo. He got COVID in February, and once recovered, had more chemo and radiation. In hope of a cure, he endured a CAR-T cell transplant in June, which gave him extreme neurotoxicity, and landed him a 4-week hospital stay and injured kidneys. Joe had battled a lot of pain and nausea almost on a daily basis during this time. June 30 he was in complete remission, but by August 30, the cancer had returned with a vengeance. Joe elected no further aggressive treatment, as he and Michele had spent several days per week driving to and from Mayo Clinic in Phoenix and their Payson home, and he just wanted to enjoy the time that he had left with his family and friends.

Joe is survived by his loving wife and best friend Michele, and their beloved son Bryce, as well as additional family members; Sisters: Sharon (Bob) Fant, Kelly (Dave) Ross and Brother: Robert Klimczak Sister-in-Laws: Pam (Joe) Hendrickson and Adrienne Harding, along with many nieces, nephews and great nephews. Joe was preceded in death by his parents, Roland Klimczak and Ava Boyd, and his brother Tom Klimczak.

Everyone Joe met loved him and his kindness, his smile that could light up a room, and his bigger than life laugh, to make sure you knew he was there. Joe always enjoyed a good laugh with friends and traveling when he could. He enjoyed his music for sure, and had fun attending concerts with Michele. He loved a poker game, and enjoying a good bourbon, too. If you were looking for Joe on a Friday night, you could find him with Michele at a local happy hour, starting the weekend off right. Joe had a big personality and a crazy sense of humor. He was always the entertainer, keeping everyone laughing.

Joe will be missed by many, especially Michele and Bryce, but he is now pain free and at peace, and will be reunited with his loved ones, that he has been missing over the years.

Joe’s wishes were not to have a service and would like donations to be made to Mayo Clinic for further research for his lymphoma cancer. He had an amazing care team there, but additional research is still needed to find cures. Memorials can be made online at www.mayoclinic.org/development Select Give Now on the right side, then select Gift Options on the next page, then page down to select Make this Donation a Tribute for, and enter Joseph Klimczak.