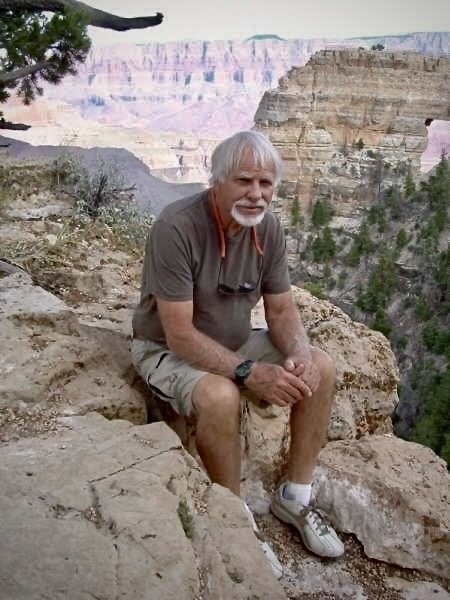 John and his brothers William Dell and Robert Dell attended school in Oakland, California, and John attended the Palo Alto Military Academy for one year in 1943-44. John graduated from Piedmont High School in 1949, after which he enrolled in the US Marine Corps, where he served from 1949-1953. He participated in the USMC football team while stationed in Barstow, California in 1952 and was stationed in Honolulu, Hawaii, Barstow, California and in Korea during the Korean War.

In 1953 John attended the California Art Institute on Chestnut Street in San Francisco, California where he met and married Dorothy Evalyn Menhenett in April 1954 in Vallejo, California. From this marriage four children were born – Diana, David, Wesley and Christina. John attended Humboldt State University and majored in the Forestry Program. He worked for the US National Park Service for several years and the growing family lived in Yosemite, Bass Lake, and Mad River, California. He was part of the original 1962 Riverside California Forest Fire Experiment Station that developed the forest fire prescribed burning technique, and he continued this work when the family moved to Lake Oswego, Oregon in 1966.

John worked for the US Forest Service in the Pacific Northwest Regional Office in Portland, Oregon from 1966-1981. John and Dorothy Dell joined The Church of Jesus Christ of Latter-day Saints in Riverside, California in 1965 and the family was active in the church, with David going on a 2 year mission to Argentina, Wesley going on a 2 year mission to New Zealand and John and Dorothy going on a 2 year mission to Milan, Italy in 2003-2005. John and Dorothy and the family were active in the church in Lake Oswego, Oregon. They also joined the Mazamas Mountain Climbing Club in Portland Oregon. John and Dorothy retired in 1980 and  moved first to Sisters, Oregon for 2 years and then to Provo, Utah where John obtained a Bachelors Degrees in English writing and Dorothy completed a degree in Costume Design & Theatre make-up. The couple then moved to Tucson, Arizona in 1986 where Dorothy pursued a Master’s Degree in Costume Design at University of Arizona and then worked as the Costume Designer at U of A Music Department from 1988-2007. John developed a new hiking and travel business and collaborated with Pima Community College offering non-credit hiking and walking tours in the American Southwest and Baja, California.

Dorothy passed away in 2007 in Tucson and John continued his hiking and walking business for many years with Pima Community College in Tucson, Arizona. In October 2019 John moved to Gilbert, Arizona where he resided until his death on February 28, 2022.

Funeral services are Sunday March 13, 2022 at the Gilbert Memorial Park Cemetery and Funeral Home 2100 E Queen Creek Road Gilbert, AZ 85297 with the viewing at 10 am and the funeral service to follow at 11 am. A graveside service will take place at Binghampton Cemetery in Tucson Arizona at a later date.