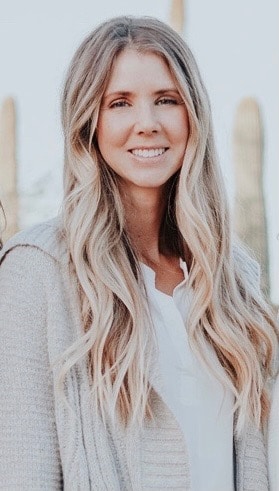 Jayme Alsup Ellis entered this world on April 14, 1983.  A true California girl and adored wife, mother, daughter, sister, cousin and friend, Jayme was full of sunshine and pure goodness.  It is with immense sadness that we announce her death, which came suddenly and unexpectedly on Thursday, October 1, 2020.

Jayme was a wonderful daughter and best friends with her three sisters.  She was also close with many cousins and cherished friends.  Jayme used her short time on earth wisely.  As a natural organizer, Jayme enjoyed planning her next adventure and jumped at any opportunity to travel. She was an avid volleyball player her entire life and especially looked forward to playing with her sisters. Jayme was often found hiking, riding bikes, running, beach camping or participating in any variety of activities. She received her degrees from BYU and UNLV, and she was an elementary teacher in Nevada, Utah and Arizona. Jayme also ran a successful online clothing boutique, Sweet Goldie Girl, named after her daughter. She loved to design and redecorate their home, and she was a natural in the kitchen and made many craveworthy dishes. Everything she did was carefully and lovingly carried out.

Jayme found joy in the journey throughout her life, and it was when she met Preston Ellis that her happiness was truly complete. He was the man of her dreams. They were sealed for time and all eternity in the Salt Lake City Temple on May 30, 2013 and had amazing adventures during their life together.

Preston and Jayme began their adventure in Vail, Arizona. Preston and Jayme then moved to Pasadena, California where the Ellises became a family of three and then four. They moved to Flagstaff, Arizona in 2017, right in time to simultaneously welcome baby number three and for Jayme to fight and defeat Hairy Cell Leukemia. Jayme’s lifelong dream of being a mother came true with Goldie Mae, Zachary Vernon and Cole Jay.

Goldie and Jayme were more than mother and daughter; they were two halves of the same whole. Watching them together was like witnessing a beautiful sunset at the beach.  Zac had Jayme wrapped around his finger. He was always within arm’s reach of his mom and especially loved snuggling close to her. Cole was Jayme’s final miracle and she was smitten with him. He was the grand finale that completed their family. Preston and Jayme’s final adventure together was moving to Guam where Jayme spent a lot of time at the beach with her treasured little family.  Jayme was a curator of family memories.

Jayme was a woman of faith and without guile with an unwavering testimony of our Savior, Jesus Christ, and a member of The Church of Jesus Christ of Latter-day Saints. She always tried to do the right thing and people naturally followed her righteous example.

Funeral services will be held at The Church of Jesus Christ of Latter-day Saints stake center located at 7361 S. Constellation Way in Gilbert, Arizona at 10:00 AM MST (AZ time) on Friday, October 16, 2020.  A viewing will be held Thursday, October 15, 2020 from 6:30-8:30 PM MST and Friday, October 16, 2020 from 8:30-9:30 AM MST at the same location. Jayme will be laid to rest at the Gilbert Memorial Park Cemetery (2100 E Queen Creek Rd, Gilbert).  Funeral services will also be broadcast online. Those attending in-person services are asked to please wear facemasks and practice social distancing.