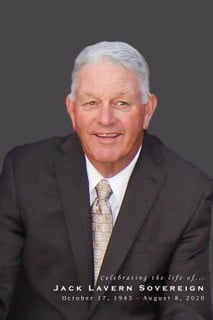 Jack was born on October 17, 1943 to Ralph Orval Sovereign and Edna May Rogers in Ketchikan, Alaska.  Jack spent his adolescent years in Boise, Idaho & San Rafael, California during which he excelled in football, baseball and basketball, eventually leading him to Eugene, Oregon where he played football for the Oregon Ducks on an athletic scholarship.  It was in Eugene that he met the love of his life, Sandra Kaye Hinson.  They were married in Vancouver, Washington on July 21, 1967 and later sealed in The Church of Jesus Christ of Latter-day Saints, Los Angeles Temple on June 4, 1974.  Jack’s life was filled with service to his friends, church, and to his country, but most especially to his family.

Jack was preceded in death by his father and mother, Ralph Orval Sovereign and Edna May Rogers as well as his mother and father in law Gladys Marie Bosman and Earl Kent Hinson.