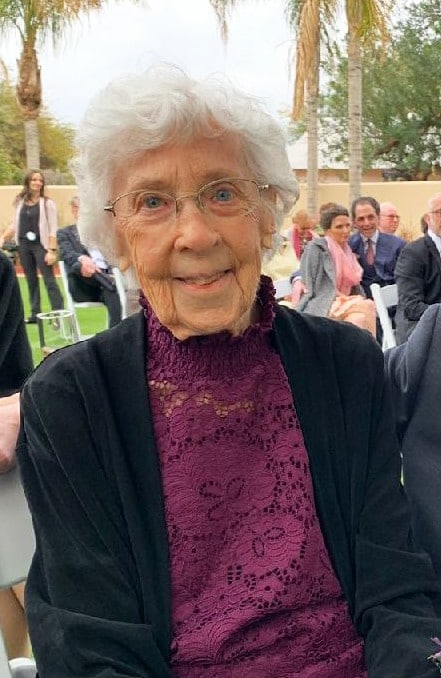 Ella Kathryn “Kay” Lawson’s spirit and body made final peace with one another, and released to God everything that made her Kay, on November 8, 2021.  Kay passed away after a one-day stay at the Lund Home administered by Hospice of the Valley in Gilbert, Arizona.

Born on the table of a farm kitchen in Montgomery County, Iowa, near Villisca, she lived through more drama and hurt than anyone as sweet as she was should have to endure:  A tough southwest Iowa upbringing on the unyielding dry farmland of the 20s and 30s; a world war; a husband passed too soon and painfully; a daughter carried off by addiction; falls and broken bones; an attempted murder by one of the most prolific serial killers in American history; a kidney stone/stent operation at 97; and, finally, constant pain and exhaustion.

But you would never have known it to know her. Kay was a woman with a bottomless inventory of good cheer, optimism, humor, and happiness, and was genuinely joyful to awaken every morning. Her marriage to Bob Lawson was a happy one; her children Susan and Steve both made her proud (and vice versa); she had many, many friends and no one she ever knew was not a friend. And she took lifelong comfort in and joy in her religion. But perhaps her most striking virtues were her intelligence and, more, her curiosity. She read voraciously, and embraced the internet in 1997 and never let go. She was surfing and corresponding (she was a speed typist from her civil service secretarial career) and downloading to her Nook and learning — and wanting to learn more — to the close of her days.

She was preceded in death by her husband Bob and daughter Susan, both deeply beloved of her. She is survived by her son Steven Lawson of Gilbert, Arizona and daughter-in-law Evelyn; and two grandsons, Michael Finnegan of Allen, Texas, and Daniel Finnegan of Plano, Texas. Kay will be interred at the Mortons Mill Cemetery near Villisca, Iowa, where she will rest next to Bob, her final wish fulfilled.