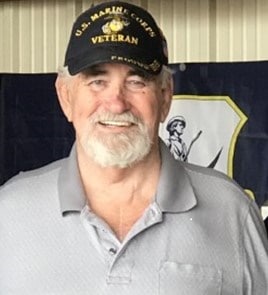 Duane Manning, 74, passed away at his home in Queen Creek on January 9, 2022, surrounded by his family, his dog, his friends, and his Kingbird Drive family.

Born in Detroit, MI, January 28, 1948 to Willa Mae Manning (nee Fogel) and Carol Manning, USMC,  he later moved to Belfry, KY until age 12, when the family returned to Detroit.

Duane was preceded in death by his parents and his brother Dennis (“Denny”) Manning, USMC, who gave his life in Vietnam.  Duane is survived by his wife, Linda Benevento Manning; his daughter Renay and son-in-law Michael, of Brighton, MI; grandchildren Carley Remson and her fiancé Aaron Zamarano, of Lynn, MA, Courtney Remson of Plastow, NH, Duane Lilly, of Brighton, MI, and Brandon Lilly of North Carolina; and 3 step-children Jeanna Thompson of Lynn, MA, and James Rooney and Michael Remson of Queen Creek, AZ, formerly of Lynn, MA.  He also leaves behind 3 grandchildren whom he unselfishly adopted and raised, Ryan Dudley, Andrew Dudley, and Olivia Thompson, all of Queen Creek.  Also survived by a brother, Garry Manning of Texas.

Duane, along with his dad and brother, Denny, were proud Marines.  Duane served 3 ½ tours in Vietnam in the Special Forces Recon unit.  Sadly, he carried the horror of that war for 50 years.  Along with being a Purple Heart recipient, he was also awarded several medals and was honorably discharged.

Duane, upon returning home, became a father of two daughters.  He worked 2 jobs and went to school nights to obtain a degree in mechanical engineering.  He went on to become a millwright, moving up to an engineer and finally a project manager, working for the “Big 3”.  He often said, “I build assembly plants,” his specialty being conveyors.  He loved his work and built many close friendships over the years, freely offering ideas, solutions, and the rewards of doing a job right.  The young took notice.  After retirement, until he became ill, it was not unusual for him to spend time on the phone still sharing his knowledge and advice with former co-workers.

Duane married Linda Benevento in 2005, and soon after, unselfishly raised three grandchildren, growing to love them as his own.  He truly loved his grandchildren, all of them.  He wanted them to see the country, so he purchased a motor home and it was on to the National Parks, which offered many treasured moments and memories.  Duane enjoyed watching his grandchildren grow and thrive with a sense of pride, for sure.  He taught them well and they respected him for it, a good “Gramp”.

He especially enjoyed playing Santa every year for the Cortina community.  This year, the event came early, December 4.  Undoubtedly, God has His hand in it, as Duane was hospitalized on December 6.

He loved his dog, “Buddy”, and that he was, his buddy.  Duane shared his old-fashioned donut with his faithful friend every morning.  Who knew the dog would thank him in the profound way he did, he lay with Duane through his illness and lay upon his feet until Duane passed away.  He loved golf and enjoyed the beauty of golf in Arizona.  Boating became a great pastime with the whole family on every launch.

“He was the captain of the ship.”

A good husband and provider, always welcoming Linda’s family and friends for a vacation in Arizona, touring everyone to his favorite places.  Generous with his time and hospitality, he loved Linda’s folks and they him.  Duane and Linda picked up her parents in Massachusetts and drove them across the country, then back again 5 weeks later.  Linda’s parents never got over what an upstanding man he was for raising and loving their great grandchildren.

Duane will be sorely missed by his family for sure.  His presence will be long lasting as his grandchildren will emulate his good character, strong work ethics, love of country, and respect for one another for years to come.

“We all love you, Gramp, rest in all God’s Glory.  Don’t worry, we got this.  Your loving wife and family.”

If preferred, donations may be made to the following charities: