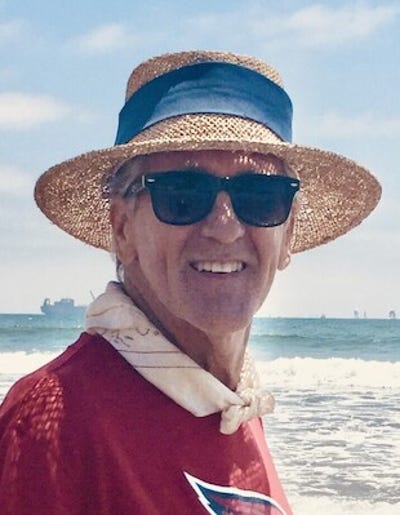 On September 18, 2021, the world lost a friend, as Donald Allen Foutz slipped away peacefully surrounded by family at his home in Gilbert.   He touched everyone he knew for good, and lived a life full of dignity, kindness and love.  Born on September 24, 1950, he was welcomed to the world as the third child of Dr. Robert and Alice Foutz, and his two older siblings, Judy and Jim.  Always a jokester, Don would say that they were the poorest kids at the Wigwam Country Club and could only order burgers for lunch by the pool, while the other kids ate steak.  He was an adventurous child and took to hiding in the bushes when it was time to go to school.  He loved all sports and spent his youth playing baseball, swimming, golfing and he earned the rank of Eagle Scout at the age of fourteen.  He attended West High School, lettered in baseball, and was elected Senior Class Vice President for the Class of 1968.  His greatest achievement in high school was winning the heart of the love of his life, the beautiful Josephine James.  Their first date was dinner at Bill Johnson’s and a Phoenix Giants game where he caught two foul balls (just showing off)!

Don and Jo were married in 1971 and recently celebrated their 50th wedding anniversary earlier this year.  Their marriage was built on love and loyalty, and they worked together to provide for their family. Brian (Shannon) was the first to arrive, followed by Brenda (Robert), Brent (Therese) and Bethany (Steve). Their early family years were filled with fun and frequent trips to Pine, Kohls Ranch, Vegas, Rocky Point, Disneyland and Knott’s.  Summer weekends included regular car trips to San Diego to stay with Jill and hang out at Mission Beach.  Don was always a hard worker and often took second jobs to provide for the family.  He worked for his father-in-law at Nelson Electric, which became Loftin Equipment, and eventually was employed for nearly 35 years as the most dedicated private process server ever, and part time photo roadie.  He loved to collect free pens, candy and sometimes river rocks.  He was the founding member of the “if its free, I’ll take three” movement.

Don loved live music and he and Jo attended scores of concerts over the years.  He and Jo traveled frequently and explored many places in the US and even walked on the Great Wall in China.  Favorite trips were to Niagara Falls, New York City, Cooperstown, Denver, Yellowstone, Mount Rushmore, Half Moon Bay, Mukilteo and Cancun.

Don was an avid, but cursed sports fan, a distinction guaranteed to be carried on by his children and grandkids.  Be it Suns, DBacks, Coyotes, Cardinals, Sun Devils, Browns or Indians, if he watched, you knew they were probably going to lose.  He never missed attending sporting events involving any of his grandkids be it football, baseball, soccer, tennis or cross country.  He may or may not have been ejected from one of Jack’s pony league games for offering the umpire eyeglasses.

He loved being a grandfather but rejected his first grandpa name of Poppie Don.  When at the Baseball Hall of Fame, he decided he would share the nickname with the great Negro League outfielder Cool Papa Bell.  That name just never stuck, but “Pops” did, and that was how he was lovingly referred to for the last third of his life.  Pops created his own catchphrases, and the grandkids always laugh as they quote his unique vernacular.  He treasured his eight grandchildren, Jack, Sarah, Carter, Joseph, William, Mia, Morgan, Owen, and his two bonus grandkids Brandon (Michelle) and Hadley, plus four great-grandchildren, Scout, Sailor, Elias and Oliver.

Don fought valiantly against cancer and endured dozens of sessions of chemo and radiation and never complained.  Even when he was in great pain near the end, he was always cheerful and never really let on how he felt.  Jo cared for him for years and they shared their love right until Don took his final breath.  Those who knew him will speak of him often.  We have to remind ourselves that some birds aren’t meant to be caged and Don is free of his suffering.  We are all better for having known him.  He is like some beautiful bird who flapped into our drab little cages and made our world a better place.