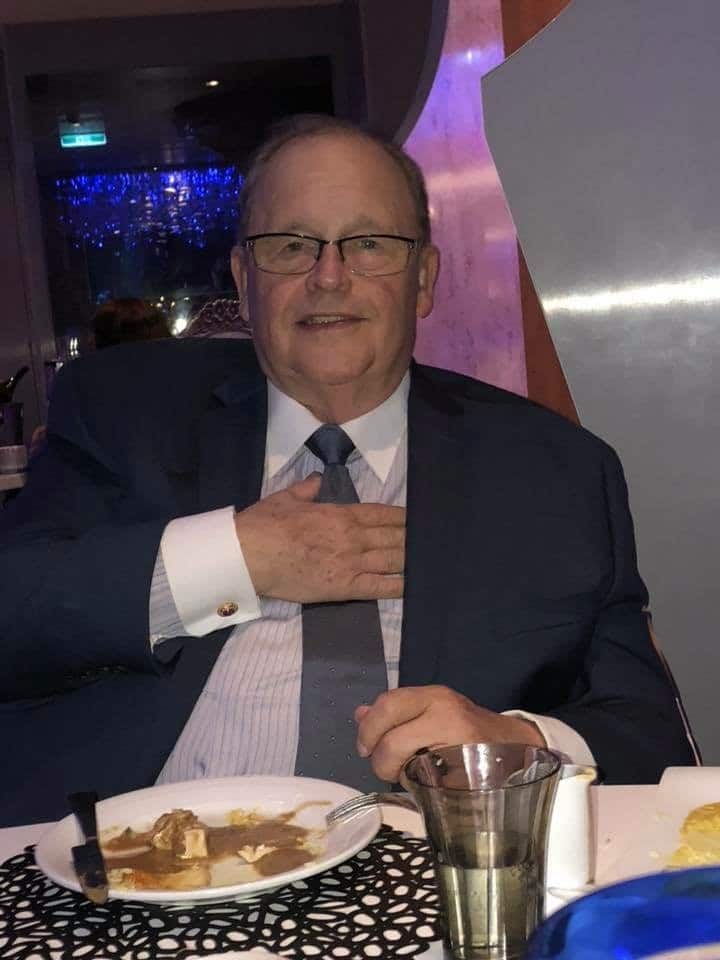 Link to watch the service: https://www.youtube.com/watch?v=PmfPGH34IQI

Dennis Thomas Kearney, 78, passed away peacefully on July 24, 2021 in Gilbert, Arizona.  He was born on November 28, 1942 in Providence, Rhode Island to Thomas Kearney and Dorothy Goodloff.  Dennis led an extraordinary life and traveled around the world to over 150 countries.  He enjoyed diverse cultures and could hold social conversation in Turkish, Arabic, Tagalog, and French.  He was an excellent cook, enjoyed keeping up on current events, and was a loyal New England Patriots fan.

After graduation from high school, Dennis enlisted in the United States Marine Corp.  He was a highly decorated Marine.  He was awarded Outstanding Recruit at Camp Pendleton, North Carolina.  He was stationed in Ankara, Turkey at the U.S. Embassy before going to Vietnam where he completed two tours.  Dennis was a member of the legendary Purple Foxes Squadron.  The squadron provided helicopter search and recovery during the Vietnam War.  Dennis received multiple accommodations including, a Bronze Star, Silver Star, 2 Purple Hearts, Single Air Medal, Navy Accommodation Medal, and the Vietnamese Cross of Gallantry.

After 9 years, he left the Marine Corp and returned to the United States to pursue a career in the restaurant and hospitality industry.  He worked for Marriott Corporation and owned and operated several restaurants in the 1970’s.  In 1979, Dennis eventually returned to his aviation career and began working for Middle East Technical Services (METS) in Saudi Arabia.  In November 1979, a group of terrorists tried to overthrow the Saudi Royal Family (the House of Saud) by seizing the Holy City of Mecca.  The event was later known as the Grand Mosque Seizure.  Dennis supervised the fire fighting and search and rescue helicopter operation to assist Saudi Civil Defense with regaining control of the Grand Mosque in Mecca.

In 1980, Dennis went to work for Saudi Arabian Airlines.  He was employed with Saudia from 1980 to 1994 as the Chief Inspector.  He left Saudi Arabian Airlines to develop his own aerospace consulting firm (Fulcrum).  Through Fulcrum, Dennis provided consultation to multiple aviation companies around the world from 1994 through 2008.

In 2008, Dennis finally returned to the United States and settled in Gilbert, Arizona.  In 2010, he began working with the Department of Defense (DCMA).  While at DCMA, he worked in the Aerospace Quality Assurance Department that supports missile defense.  Dennis eventually retired from DCMA, on his birthday, November 28, 2018.

Dennis is survived by his wife, of 40 years, Salustiana Roallos Kearney of Gilbert, Arizona.  A daughter, Shannon Moreno of Casa Grande, Arizona and two sons, Sean Kearney of Goodyear, Arizona and Romnick Kearney of Guilford, England. He is also survived by his brother Brian Goodloff of Carter Lake, Iowa. His legacy will continue through his three grandchildren, Jacob Moreno, Preston Kearney, and Gabrielle Moreno.  Dennis was proceeded in death by his mother, Dorothy Goodloff, his son, Todd Kearney, and his brother, David Goodloff.

The funeral service will be held at 10:00 am on Friday, August 6, 2021 at Gilbert Memorial Park, 2100 East Queen Creek Road, Gilbert, Arizona 85297. You can watch the service at: https://www.youtube.com/watch?v=PmfPGH34IQI.  Military funeral honors will take place immediately after at the National Memorial Cemetery of Arizona, 23029 N. Cave Creek Road, Phoenix, Arizona 85024.