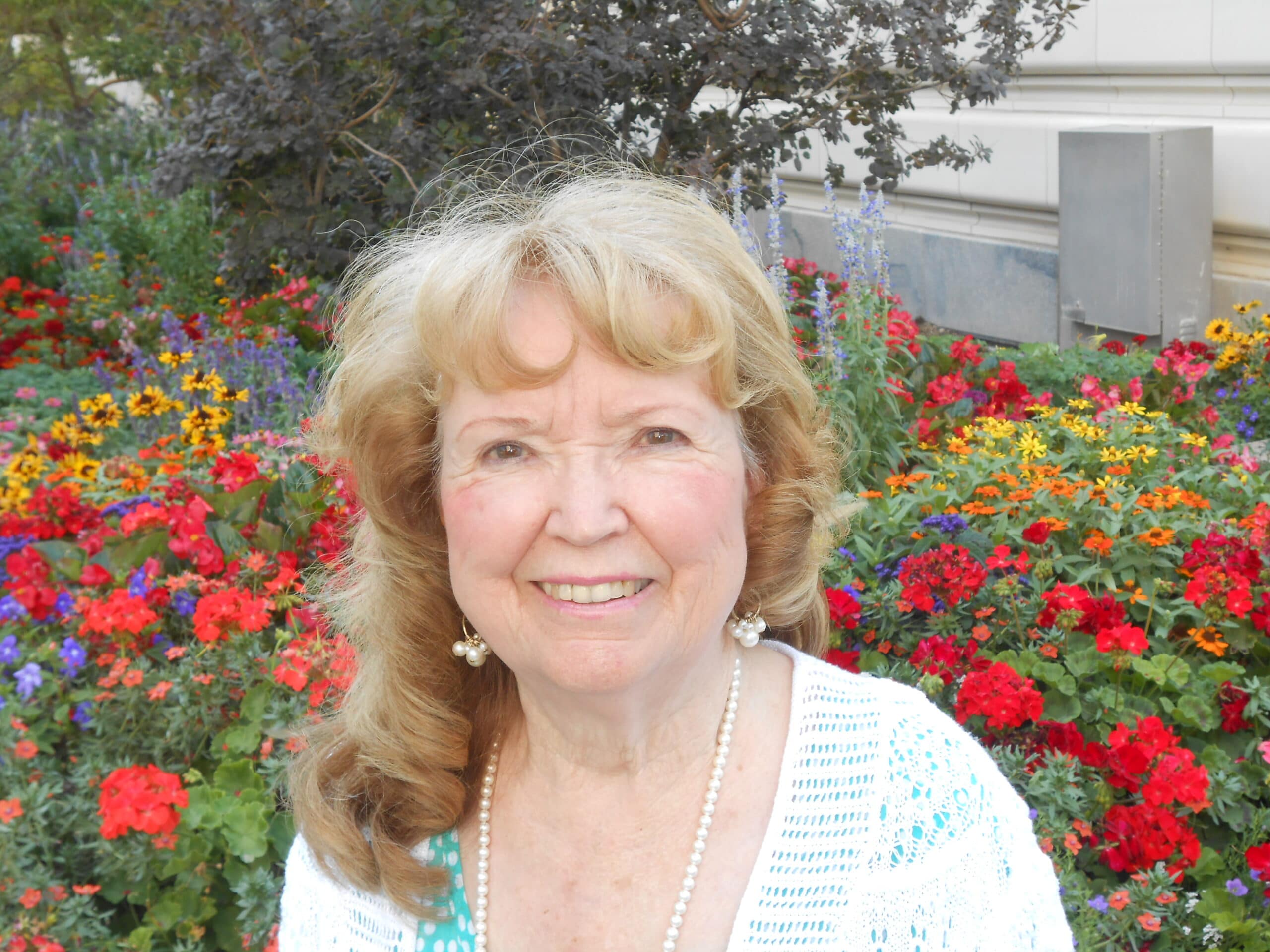 The zoom link is   https://youtu.be/G-mBEHkERQo   for those who wish to watch the funeral remotely.  Please be aware that Arizona is currently on Pacific Time.

She was born at Liberal, Kansas on the first day of spring, March 21, 1930.  She was named Christine Elizabeth Clarkson, Elizabeth for both grandmothers. She was the daughter of Norma Shupe and Joseph “Joe” Clarkson.

Christine’s maternal grandparents were converted to the Church of Jesus Christ of Latter-day Saints about 1876 and called by President Wilford Woodruff to settle near Taos, New Mexico.

Her dad came to the area near Taos, met her mother and was baptized before their marriage. Joe worked for the Forest Service and the family lived in a country home with no electricity and a hand pump in the kitchen to pump the water up from the cistern.

When Christine was six years old her brother Dale got polio, and after about two weeks she had all the same symptoms but with special prayers and a blessing by the Elders she was healed.

In 1941, the Clarksons moved to Mesa, Arizona.  She remembered it as the perfect place to grow up, there were about 10,000 people in Mesa and most of them were LDS. Christine was taught the gospel all her life by the example and teachings of her parents. She was the second of eight children, and they were a very close and loving family. Her sisters and brothers are: Barbara June Geiser (Gene), Dale Edward (Patsy), Donald Dean (Carolyn), Alice Marie Turley (David), Joyce Fay Allen (K. Nelson), Lynette Cecelia Foster (Philip), and Steven Gale (Liana). Christine was preceded in death by June, Alice, and Joyce.

High school was a happy time for Christine. She twirled the baton with the Mesa High School band and a large marching squad. At graduation, she received special honors for attending every class all four years, with the exception of missing just one class.

After high school, Christine graduated from Marinello cosmetology school in Phoenix, and had her own beauty shop in Snowflake, Arizona.  She was then called to the Northern California mission.  The age at that time was twenty-three for sister missionaries to be called and Christine was only twenty years old, so she considered this exception to be one of her “special miracles”.

When Christine returned home from her mission, she married James Franklin “Lin” Stewart in the Arizona Temple. They lived and worked at his parent’s logging company near Winslow, Arizona for two years, and their first child was born. Then they left the logging business and moved to a large cattle ranch near Dewey, Oklahoma.

From living in the city to living in the country, life was very different. When Christine wanted to serve chicken and noodles for dinner, she took her .22 rifle out and shot the chicken, made noodles, and served a good dinner.

Christine and Lin lived in Oklahoma for twenty-four years and had five more children.

In 1956, the Stewarts started a limestone crushing business with Lin’s dad and brother; later Christine and Lin started their own similar business. Christine was the bookkeeper of each of those companies. The family lived in several cities in Oklahoma: Dewey, Bartlesville, Cleveland, Pawnee, Ardmore, and Stillwater.

Christine divorced Lin in 1978 and she moved back to Mesa, Arizona. She became involved with the Single Adult program, and especially enjoyed dancing at the singles dances.

When the ranch home was sold, several large walnut trees were cut down and had lumber made from them. Christine had taken college classes on furniture making and made some walnut furniture for her children. She also enjoyed China painting and oil painting, and was an excellent seamstress.

Christine held many Church positions both in the ward and stake. Her favorite was teaching early morning seminary for three years and working in the Single Adult program for 17 years.

The patriarchal blessing that Christine received when she was fourteen says, “No harm or danger shall come to you, but you shall have joy and peace all of your life.” This was a comfort to her, and she stated that, “No matter what the circumstances are, my Heavenly Father has greatly blessed me.  Like the FOOTPRINTS IN THE SAND poem, I know He has carried me many times.  With the gospel of Jesus Christ as my guide I have had joy and peace all of my life.  I’m also grateful for the perfect health I’ve been blessed with.”

Christine had a special love for genealogy all her life.

Christine found it fun to travel with her sisters throughout the United States and to many foreign countries where their ancestors lived.  When they went to Wisconsin to “Holy Hill” near Milwaukee where Irish Catholics settled in 1844, the sisters looked through the cemeteries and found the headstone of Catherine Ryan.  It said she was born in Lismore Parish, Waterford County, Ireland. When they went to Ireland, they went directly to the Catholic Church of Lismore Parish and there listed on the second page were their Ryan ancestors.

Another time they were searching the records of Virginia and found a letter written by their ancestor, David Clarkson, to Queen Mary dated 1702. While they were in London, they went into the Public Records office and excitedly asked the receptionist to guide them to the colonial records from America. He paused and said, “Me Lady, do you know we have ninety-four miles of documents here and you hope to find your letter written in 1702?”  He sent them up three flights of stairs and the first book they looked at had the exact letter.

Around 1994 Christine was privileged to work with her sister Alice and her husband David Turley, who had been Family History missionaries in Indonesia for two years. They perfected over 40,000 names for the Ancestral File and temple work.

They then went back to Indonesia and Christine met many of the Saints who had entered the names.  In each of the eighteen branches, at least one family had ancestors traced back to the kingdoms. Their ancient chart goes from the kingdoms back through Mohammed, Ishmael, and Abraham, back to Adam. Another line goes back from the kingdoms back to a brother of Seth. It was wonderful to see the hearts of the children being turned to their fathers in every nation.

Christine enjoyed travelling the world with her sister June Geiser, who owned a travel agency. They went on many cruises together.

Christine served two Family History missions in Salt Lake City. Then in 1997 she went back to Oklahoma to help Lin and their son Larry with the office at Stewart Stone, Inc. While there Christine became reacquainted with Walter Albert Kelly Jr. Christine had known him in the Stillwater Ward twenty-five years earlier and had each been single for many years. After a year of dating, they were married on September 5, 1998, in the Mesa Temple. They lived in Stillwater, Oklahoma together until he died of cancer on April 26, 2002.

Christine then moved back to Salt Lake City and lived in a condo across from the Conference Center, facing Ensign Peak. She went on another part-time service mission at the Church Office Building. In 2005, Christine painted a six-foot-long folk art montage of her whole life and included events from the lives of her ancestors and from Church history. She titled it, “America the Beautiful, Have Joy in the Journey with Mother and Me”. She made digital canvas copies of this painting for all her descendants, nieces, and nephews. She was asked to make a digital enlargement of the painting, fourteen feet long, and it was displayed in the Church Family History Center in Salt Lake City for about seven years.

In 2006, Christine bought a condo on the third floor of Gateway Apartments directly across from the Salt Lake Temple. She loved living there and had a beautiful view of the angel Moroni statue outside her windows, along with all the seasonal Christmas lights on the trees in Temple Square. Christine served as a temple worker in the Salt Lake Temple for five years. In January 2020, Christine moved into the Spring Gardens Holladay assisted living facility in Holladay, Utah.

She is survived by six children, twenty-five grandchildren and forty-seven great-grandchildren.

Funeral services will be held Friday, June 18, 2021 at Gilbert Memorial Park, 2100 East Queen Creek Road, Gilbert, AZ, 85297. Visitation will begin at 10:00 a.m., service at 11:00 a.m., with reception and luncheon to immediately follow. The zoom link is   https://youtu.be/G-mBEHkERQo   for those who wish to watch the funeral remotely.  Please be aware that Arizona is currently on Pacific Time