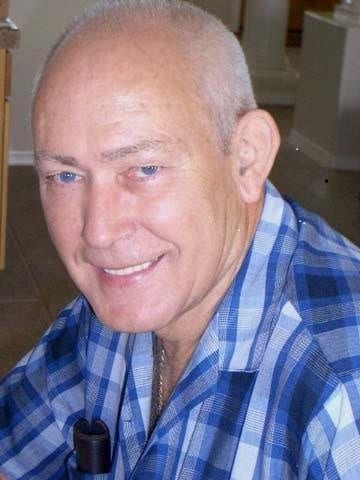 We are deeply grateful for the life and love of Alfred K. Rayher, who was admitted to hospital with COVID-19 shortly after Christmas and died of pneumonia a couple of weeks later. We cherish the time we had with him in this life and look forward to seeing him in the next.

Fred “Freddie” Rayher lived a truly amazing life. He was born in Schozach and was raised in Marbach am Neckar, Baden-Württemberg, Germany. As a young man, he joined a guild and became a skilled tool and dye technician. He left Germany to escape poverty and oppression, living in England and Canada. After many travels, he landed in California, where he met his beloved wife, Virginia, and worked for Lockheed Missiles & Space Co. He and Virginia moved to Arizona after their retirement, where they lived happily with a series of German Shepherd dogs.

He was Virginia’s great love, and a loving stepfather to her daughters, Gina, Olivia, and Margie. All of them cherished him greatly and miss him terribly. He was a model train enthusiast (mostly Märklin HO), an aficionado of Mercedes-Benz cars, and a great lover of German Shepherds, including Mandy, Heidi, and Julie, who surely gathered at the Rainbow Bridge to guide him across.

He was preceded in death by his parents, Gertrud and Walter Rayher, and his brother, Walter. He is survived by his wife and stepdaughters, as well as his first wife Brenda Dionne, his son Alan Rayher, his daughter Sonja Reichenberg, and several grandchildren.

There will be a visitation Saturday, February 5, 2022 at 10 am at Gilbert Memorial Park Cemetery and Funeral Home, 2100 E Queen Creek Rd, Gilbert, AZ, followed by a brief memorial service at 11 am and a reception with refreshments at noon, with time for all to remember Fred and share stories about him. Flowers may be sent to Gilbert Memorial Park.